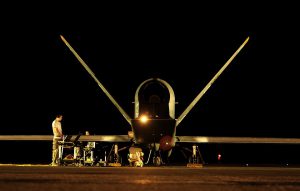 Drones are such a monstrosity, according to public consciousness, that recently Guardian columnist Simon Jenkins welcomed the prospect of a President Trump on the grounds that, at least, there would be an end to drone strikes. Why are military drones taken to be so bad that even Trump is preferable?

Superficially, you’d think everybody would be crazy about drones: the military because of their increased capability and reduced risk to personnel; anti-war campaigners because of the plausible promise that drones would also reduce collateral damages; we finally have a weapon which is both safe and precise, what could possibly go wrong? And indeed there are some very influential drone enthusiasts, most prominently President Obama.

Here I want to briefly argue that widespread fear of drones is due to our misunderstanding the concept of control or, more precisely, to our bias for conscious/direct control. For understandable reasons – for example the fact that they are unmanned – we think of drones as a step towards increasing loss of control over military operations and violence more in general.

The idea, if you simplify it to the bones, goes something like this: in the short to medium term, delegating some tasks to drones has obvious benefits, such as increased safety for military personnel and maybe – just maybe – a reduction in collateral damages. But exactly because of the obvious immediate benefits of delegating those tasks, there is the serious risk that we start delegating an increasing number of tasks until we end up losing control over such crucial things as decisions over life and death.

There are different elements of this kind of argument that one could find less than plausible: for example, in the normative version of the argument, the idea that the short to medium term benefits would outweigh – at least from the point of view of decision-makers – long-term risks about loss of control; or, in a psychological version of the same argument, the slippery-slope idea that, somehow, short-term benefits would drag us into long-term trouble that we never wanted in the first place.

Neither is, though, what I want to focus on here: rather, I think that the very formulation of such an argument depends on misunderstanding the concept of control in the following important way: delegating control does not amount to any loss of control nor, indeed, to any reduction in control. The opposite is the case: delegating control is a way of strengthening one’s control. Importantly, this is the case whether control is being delegated to another person or to a system.

The previous paragraph was packed with three different claims, which I will explain and defend now:

To better understand these points, take Cass Sunstein’s recent work on the idea of choosing not to choose. Delegating choice is parallel to delegating control: we constantly and actively do so because it is in our interest to have someone else – an expert, say – choose for us. So there is no loss in letting someone else – person or non-personal system – choose for us; indeed, there is everything to be gained by having something or someone with better knowledge of both our preferences and the available possibilities make those choices.

As Sunstein points out, “People might decline to choose for multiple reasons. They might believe that they lack information or expertise. They might fear that they will err… In daily life, people defer to others, including friends and family members, on countless matters, and they are often better off as a result… Indeed, people are often willing to pay others a great deal to make their choices for them” (14).

Choice delegation, then, is not just economical because of the resources that we can spare – in terms of cognition, time, etc. We delegate choice to persons or systems that we have reason to believe will be in a position to make a better choice than we would have ourselves. Delegating control works in the same way: it is not just a question of sparing cognitive resources or time that we can then invest otherwise; it is a way of increasing our control because the person or system to which we delegate is in a better position to exercise control than we are.

When talking about delegating conscious/direct control to systems, there is no need to think of fancy apps or cutting-edge developments in robotics or artificial intelligence. It’s enough to mention such old-fashioned things as doors or locks. As I write, my bike is locked in the courtyard outside: what a luxury, come to think of it, that I neither had to drag it all the way inside the office nor have to spend my working day watching over it. I am neither directly nor consciously controlling my bike at the moment; but that does not mean that I have less control over it; the opposite is the case, as my lock does a better job than I ever could while I can invest my resources elsewhere (more on this idea here).

Delegating control is, then, just a part of the larger phenomenon of division of labour: having also the same kind of, double, advantage; on the one hand, the individual who delegates frees resources to be re-invested elsewhere; and on the other hand the individual or system to which we delegate is or becomes an expert, which means that the task is performed to a standard that would not have been otherwise achievable for the individual who delegated in the first place.

At this stage it will be no surprise that I think this is what is going on with drones: we delegate some tasks to systems which are better equipped to perform them. Delegating those tasks amounts, in some cases, also to delegating conscious/direct control; but once we have properly understood the nature of control as above, there is no reason to be skeptical or scared by this kind of control delegation; indeed, as we have shown, it is both ordinary and effective. It’s not just that we will, normally, retain control over the drones; more importantly, we enhance our control over the overall task or mission by delegating some of the tasks to drones.

So there is no principled reason to think that drones or other systems will limit our control. But this is not to say that drones are unproblematic: a proper understanding of delegating control is not the end of it; it is, much more, a presupposition for a more fruitful discussion of a variety of important issues related to control and responsibility in military technology (more on this in our book Drones and Responsibility).

More in general, what I have put forward here is far from a defense of current deployment of drones: but the reasons why that’s problematic have nothing to do with our understanding of control neither are they of a philosophical nature. I will briefly explain my reservations to conclude this piece (more in my forthcoming article Drones and the Threshold for Waging War).

Ironically, the problem with drones – over the last decade – seems to have had to do exactly with their supposed positive characteristics of being safe and precise; take the well-documented use of drone strikes by the United States in parts of, say, Pakistan for so-called targeted killings. The Obama Administration has recently released data according to which such strikes killed – for the period 2009 to 2015 – between 2372 and 2581 enemy combatants (to be precise: the numbers are not just for Pakistan and also include manned strikes, not just drones) – and between 64 and 116 civilians (those are, again, the Administration’s own numbers, while other estimates go up to 800 civilian deaths).

We can fairly uncontroversially assume that many of those would not have been killed had the US lacked the capabilities offered by armed drones. The reason for this has been explained by Obama himself in public, for example in his 23 May 2013 speech Remarks by the President at the National Defense University (see Franke 2014: 130). In that speech, Obama warned about the risk that manned operations would “lead [the US] to be viewed as occupying armies, unleash a torrent of unintended consequences,” and “may trigger a major international crisis”.

Obama’s simple point is that armed drones allow one to do things that would have otherwise been impossible or anyway much more difficult, not just from a strategic point of view but, more importantly, from the point of view of politics and international relations.

So the problem with drones has nothing to do with philosophical issues of control; it is rather the fact that drones – and this is according to their biggest fan in the White House – change the politics of waging war in a way that even targeted killings become more acceptable both at home and abroad. Whatever you think of the intended victims of targeted killings, the increased acceptability of these operations is problematic exactly because, as we have argued here, there is – in principle – nothing unconventional or even interesting in having drones carry them out. 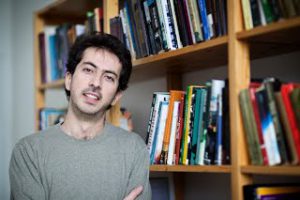 associate professor of Medical Ethics at the University of Copenhagen. His latest book, Drones and Responsibility (co-edited with Filippo Santoni de Sio) will be published by Routledge this week.