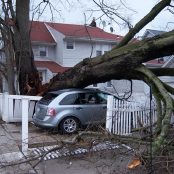 Tornadoes are surprisingly common in the United Kingdom. If one hits and destroys my house with me in it, I am quite sure that someone from a local or national response agency will come and rescue me from the rubble, give me food, medical attention and a bed for the night. Whether I am a citizen or a foreigner, customary international law dictates that disaster relief should be delivered to those affected by natural disasters. However, this is ‘custom’ and not required by affected governments  for foreigners.

Now, what happens when a government denies assistance to its citizens? The short answer: not much more than (varying degrees of) diplomatic talks. There is no international law, mechanism or policy to suggest that the international community should forcibly intervene to deliver necessary disaster relief. In fact, in 2007 the United Nation’s International Law Commission began the process of developing a multilateral framework on Protection of Persons in Event of Disasters. Those involved in these discussions decided that countries should not have the responsibility or authority to intervene when a national government is unable or unwilling to assist people in its care in the aftermath of a natural disaster.

I am sure that many of you reading this will not need much of an argument to agree with the central premise of this argument: the international community should assist humans affected by a natural disaster when their national government cannot or will not do so. However, instead of elaborating on this argument here, I want to respond to some of your likely concerns with developing the necessary associated policy. There are many possible criticisms of a natural disaster intervention policy: possible imperialist motives, ‘dirty hands’, detrimental long term effects on both the responders and those affected, the demandingness of natural disaster intervention, lack of political will, and the sovereign right of states. Here I will focus on just two of these: the possible imperialist motives and ‘dirty hands’.

First, the traditional way of providing disaster relief to natural disaster-affected countries is to wait for a request for assistance or at least for consent from a national government that assistance can be delivered. From history we know that countries may have imperialist motives for assisting other countries. The norm of non-intervention therefore insulates affected countries from imperialistic threats to the domestic government. Developing a new norm/policy for natural disaster intervention will increase the reasons for – and therefore the number of – interventions carried out by the international community. This will only create more situations in which imperialist countries will try to impose their will on vulnerable countries. 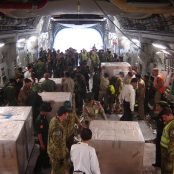 These are valid concerns, but don’t provide the whole picture. First, it is naïve of us to think that given the precedent for intervening in specific types of emergencies no state will ever intervene in the aftermath of a natural disaster when they can’t get a national government to consent to assistance – imperialist motive or not. For many, intervention is about saving the innocent humans – the type of emergency humans are faced with is irrelevant if the will to help is there. For those with imperialist ulterior motives wishing to intervene, we need to be ready.

So, we (meaning the international community) must develop a transparent and pre-established plan for natural disaster intervention. Doing so will have several positive outcomes. For one, it will stop rogue action. By making intervention possible and giving intervening countries rules to follow, we can keep those providing assistance in line. We can also develop a mechanism of admonition for those countries who do try to impose imperialistic rules on the disaster affected country. This should give the possible imperialists at least pause for thought before acting. Hence, while the development of natural disaster intervention policy increases the opportunity for imperialists to act, we can at least monitor the very likely possibility that countries will want to intervene during some future natural disaster.

A second potential criticism of a natural disaster intervention policy is that of ‘dirty hands’. ‘Dirty hands’ is a moral dilemma in which there is no ‘good’ option. Imagine that a group of people is being systematically murdered by government officials. If we intervene, we will have to kill government officials. If we don’t intervene, innocent people will die. Regardless of our reading on the situation, we as the interveners will have to kill someone. Either way, we will ‘have blood on our hands’; our hands will be ‘dirty’. 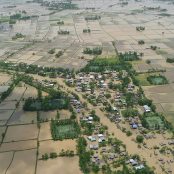 Now, ‘dirty hands’ is usually used as an objection to getting involved in conflict situations. However, it is just as applicable in a natural disaster intervention. Let’s apply the dirty hands objection to what might have happened had an intervention taken place after Cyclone Nargis in Burma. The Burmese Government refused external assistance and stopped granting visas to foreign aid workers. If the international community had decided to intervene (instead of waiting out the diplomatic negotiations) a dirty hands situation may have resulted. Assistance would have been provided to those lacking food and shelter. At the same time, providing assistance in this way without permission would likely have risked the lives of those intervening and long term stability in the country and region. Regardless, our hands would have been ‘dirty’.

Luckily, the Burmese Government did bend to diplomatic pressure and allowed aid into the country. However, with intervention impermissible, there was no possible way of helping those affected by the cyclone had they not succumb to international pressure. Disallowing intervention as a possible response vehicle ensures that people will definitely not be saved by an intervention. That is morally unacceptable.

In sum, a natural disaster intervention policy may not offer all the answers to post-disaster assistance when a national government is unable or unwilling to help its citizens. However, by not having a system in place we ensure that people will die unnecessarily. We at least owe it to natural disaster-affected humans to have a mechanism for assisting them in the same way that we would assist those affected by conflict or genocide.

Lauren Traczykowski has a BA in International Relations from Boston University (US) and an MA in International Studies, Globalization and Governance from the University of Birmingham (UK). Her PhD in Global Ethics (University of Birmingham) provides ethical justifications for the development of natural disaster intervention policy. She has a forthcoming chapter titled A (Human) Rights-Based Approach to Natural Disaster Intervention for Nonhuman Animals in Intervention or Protest: Acting for Nonhuman Animals from Vernon Press.

“Australian aid being unloaded in Myanmar in response to Cyclone Nargis, 2008.” (CC BY 2.0) Photo: AusAID, Department of Foreign Affairs and Trade Australia, via fickr

“Cyclone Nargis” (CC BY 2.0), Department of Foreign Affairs and Trade Australia, via flickr